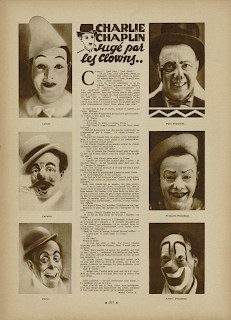 I just came across this by chance. Some of the top circus clowns in France, in 1929, giving their opinion on Chaplin and whether he was a clown or not, soon after the release of his film ‘The Circus’.

Here some of the replies given in interviews at the Cirque Médrano, published in an article in the magazine Cinémonde (no. 17; 14th February 1929). (It seems like it's not just today that clowns are overly critical of each other.)

Porto: “I was disappointed. First, let me say that the Americans don’t understand circus… The clown doesn’t exist for them. Charlie did know the circus well. That’s undeniable. But he undoubtedly sought to please his compatriots. He conformed to their tastes. As Charlie Chaplin is an old circus artist, a music hall artist…. I thought Charlie would be more daring. Wasn’t he more of a clown in other films? I loved him in his role as bank teller. As he is a true clown, and I can see him in our place in the circus. he has the physical play like Footit had… He is a conjuror. He is an acrobat. You can see he was a clown, as he can play pantomime. “

Cairoli: “I don’t think he’s a clown. he knew the circus well, but I think he couldn’t do all that we do. In the cinema, it’s easier to make people laugh. If you do a bad take, you cut a few metres of film or you do it again. With us, you can’t erase a single gesture. You have to be at all times, unfailingly amusing. And that, I can tell you, is very difficult.”

Francois Fratellini: “Certainly, Charlie Chaplin is a clown. He was one a long time before becoming The Little Tramp in the cinema. I remember seeing him at the Olympia. He was with the Karno troupe then. He took all the slaps that weren’t intended for him, and retreated offstage, form where he bombarded his fellows with al kinds of objects. … I don’t like tis film. I found Charlie a lot funnier in other films. There was more fantasy. No doubt, he posses all the qualities which make a good clown. It’s just that his job is easier. His jokes in front of the camera don’t have to work first time. Despite that, Charlie is for me a good clown. But a clown I’d like to see in the middle of a real circus.”
Posted by Jon Davison at 5:33 pm No comments: