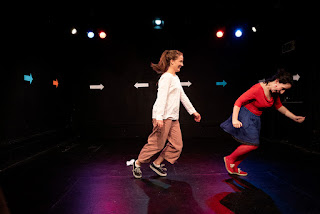 1 What we achieved, compared with the original aims of the project:

The proposed project comprised a number of activities including rehearsal, performances and open workshops, all of which were carried out as planned. In rehearsal, a total of over 100 full days of artist employment were funded, shared between 5 core performers and 3 collaborating artists.  5 public performances were given, one per month, as planned, at the Rosemary Branch Theatre. 5 open workshops were held, 3 at specialised performer training institutions (Royal Central School of Speech and Drama, Rose Bruford College and London Metropolitan University), one at a community arts centre (Kentish Town Community Centre) and one at Rosemary Branch Theatre.  Each workshop had at least a dual function: firstly, to further the process of the project’s research and development by involving participants directly in the questions and practice relevant to the participating artists at the time of the workshop; and secondly, to share ongoing findings, skills and approaches with participants such that the latter might reuse the experiences in their own artistic, personal, social and/or educational development. Each workshop took a unique focus, determined by the nature of the participating venue and users.

‘Practical Clowning Research’ at London Metropolitan University shared with performing arts students the starting points that project artists had taken in the process of developing performance from training.

‘To Laugh or Not To Laugh? Artists' Day’ at Rosemary Branch Theatre brought together resident and other artists at the theatre to experiment with some of the project findings and their impact on their own artistic development.

‘Community Arts Clowning’ at Kentish Town Community Centre used clowning and basic clown training in the context of social club events designed to bring neighbours of all ages together.

‘Clowning Practice as Research’ at Royal Central School of Speech and Drama invited staff and postgraduate students to ask practical questions about how clown training works within the wider context of performer training.

Rehearsals focused on the processes of bringing laughter-response clown training to the public stage. A total of 21 main exercises underwent this process of staging and were tested a number of times in the five public performances given.

The rehearsals also looked at how laughter-response training might bear upon non-clown, but related, forms such as circus and stand-up comedy, using the exercises to ‘filter’ these genres. These were also tested in the public performances.

The performances thus served as experimental opportunities to gauge the effect of such training on the quality of the dynamic relationships between performers and audiences.

Ongoing evaluation and monitoring of the project was carried out as proposed, using real-time online feedback through social media to gauge responses to work in progress. 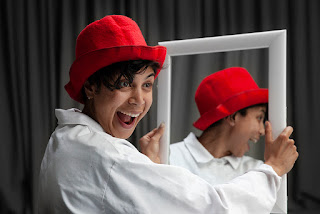 2 What we learned, and how the project has helped us to develop:
Learning and development arose from all three of the main activities in the project: rehearsal, performances and open workshops.

Rehearsals: staging of training exercises was carried out in a variety of different ways - in bare form, with set-ups, with added narrative, or as filters for existing material. Work in rehearsals focused on:
1.      Adapting the exercise for stage, addressing how the information necessary to read the performance can be transmitted to a live audience without explaining the content as if it were an open workshop. This included staging means to set up the action and sometimes to add situational elements.
2.      Training in the execution of the exercises. This involved finding ways for performers to be autonomous without the need for the workshop teacher’s framing. Constant practice needed.

Through engagement with these testing methods for staging, a minimum set of requirements was developed for each of the 21 exercises. Also developed were staged versions with a maximum amount of added elements which still allowed for the clown dynamics of the exercise to drive the performance, without recourse to fictional layers of scripting. The forms which emerged thus drew their staged effects primarily from the clowning dynamics which the original exercises were designed to train, fulfilling the aims of the research which was to create clown performance derived from laughter response rather than from fictional characters, roles, narratives, sketches or variety acts.

Performances: each staged form was tested at least twice over the run of five public performances. These choices were presented in sequences which sketched out a bare skeleton of a structure for an hour’s performance. Focus, however, was on the testing of each segment, rather than on the unity of the show as a whole at this stage.

It was found that some stagings/exercises proved more successful in public performance in terms of engagement of audience, laughter response, and ‘readability’ for spectators. Those stagings which were least successful were subjected to further research in rehearsals as well as open workshops before being re-presented in public.

Open workshops: over the course of the five open workshops, a variety of developments occurred.
At ‘Practical Clowning Research’ at London Metropolitan University there emerged new, unexpected and more complex forms of a group of exercises focusing on the intrusion of clowning into other genres of performance.

At ‘Clowning Experiments’ at Rose Bruford College, participants helped develop new ways to experiment with specific exercises which we had yet to find way of staging. There emerged several options for training concerned with the immediate visual and vocal impacts of clowning.

At ‘To Laugh or Not To Laugh? Artists' Day’ at Rosemary Branch Theatre, participants and project artists worked together to develop a range of responses to the specific architecture and space of the theatre from the starting point of clowns in response to laughter.

At ‘Community Arts Clowning’ at Kentish Town Community Centre, participants joined project artists in basic clown training exercises before trying simple stagings of them. The event tested the extent to which non-performers might engage with the training ad performance of laughter-response clowning, with considerable success. This potentially confirms the hypothesis that this form of clowning reflects some fundamental notions of how clowning works which are shared across ages, communities and cultural experiences.

At ‘Clowning Practice as Research’ at Royal Central School of Speech and Drama, participants came up with a variety of preliminary conclusions about the divergence of laughter-response clowning from mainstream actor training methods (including orthodox clown training current in UK drama universities). 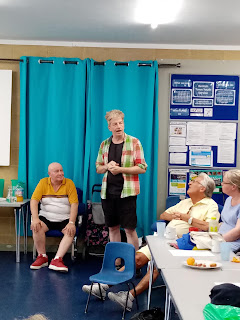 3 Longer term impact the project has had:

The development of new staging choices derived from laughter-response clown training has led to a number of impacts beyond the process itself.

From training to performance:
The tested stagings were presented in sequences which sketched out a bare skeleton of a structure for an hour’s performance. Although the focus was on the testing of each segment, rather than on the unity of the show as a whole at this stage, there emerged ways to create ‘bundles’ of stagings, which led performers and spectators from the simpler phases of the training on through ever more complex structures. Thus it was that sections of the performance presentations also began to work in a parallel path of ‘learning’. This pointed in the direction of a larger scale dramaturgy that would perhaps mirror the programme of training as it develops over the period of a training workshop or course. This long form can thereby act as the starting point for the building of a whole show, based upon the findings of this R&D project.

The varied and intensive nature of the open workshops, bringing project artists together with students, teachers and community and other artists, suggested future impacts which include:
-        - New approaches to be developed by non-project workshop participants in their own fields of performance, educational and community activity. These paths might draw upon the new links suggested by the project between training and performance, which may be applicable both to clowning and non-clowning work.
-         - Personal artistic development of project artists. Via the participation in the delivery of the open workshops, participating artists were able to evolve in their own practical knowledge and insights into facilitating workshops, opening up new avenues for individual artists’ future development as facilitators.

Photography
The project’s use of ongoing visual documentation by a professional photographer enabled a parallel research to be collaboratively developed into how clowning might be perceive, recognise or understood outside of the actual moments of performance. Visual images, still and moving, were regularly tested via social media to assess the impact of the clowning under exploration. The contribution of the professional photographer was thus extensive, via three main photo shoots covering rehearsals, performances and workshops. This served two main aims: firstly, to document the project; secondly, to explore visual images of clowning as a dynamic relationship between performer and spectator, researching means by which to communicate and chime with a contemporary audience who might be disposed to the experience of this new type of clown performance.

In conclusion, this period of research and development has enabled us to move to a position where the creation of a complete show may be envisaged clearly as the next phase in our artistic development. 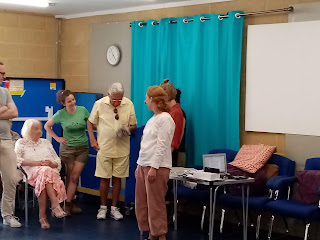